PKF Study – Unemployment and the potential economic implications of the COLA 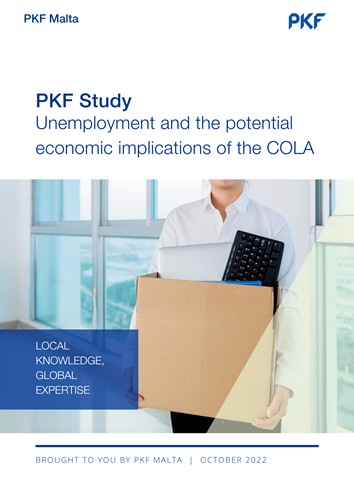 The Maltese labour market has undergone a substantial transformation over the past 10 years, whereby strong economic growth has led to historic low unemployment levels. The world of work remains a critical yet challenging one. The world is facing a unique challenge as a confluence of different forces are acting together and can bring fundamental and disruptive changes in our economies and the world of work. New forces, accelerated by the pandemic, are transforming the world of work as we speak and continue in the near future.

On a national level, Malta’s economy remains resilient together with our labour market. Unemployment remains at record lows and well below European averages. As at 2021, Eurostat figures show that the unemployment rate in Malta stood at 3.5% (compared to the EU’s average of 6.4%), being the third lowest rate reported following Czechia (2.8%) and Poland (3.4%).

A disparity within the labour market is evident. The latest data published by the NSO indicate that as of the second quarter of 2022, 8,446 people were unemployed in Malta. Notwithstanding, shortages of staff are still a daily issue for firms and matching the right talent for the jobs required is also a challenge. During 2021, Jobsplus administered a survey among a sample of employers to identify those occupations for which there was a shortage or a surplus, which skills were lacking, and how employers in Malta tackled these issues. Findings indicate that almost one-third of employers experienced a shortage of employees and/or skills. The hardest-to-fill vacancies in 2020 were for delivery persons and heavy truck and lorry drivers. The hardest-to-fill vacancies were mostly found within the Wholesale and Retail Trade and Repair of Motor Vehicles and Motorcycle sector.

Entities such as Jobsplus may reduce information asymmetry by matching job seekers’ abilities with employers’ demands. However, studies have found that informal search channels such as personal contacts, direct applications, and/or responses to job advertisements are used more frequently and effectively. This is mainly due to selection bias. Typically, those looking for work through Public Employment Services (PES) belong to groups that are underrepresented in the labour market, such as people who lack personal networks, had a history of unemployment, or face other work impediments. In addition, jobs offered by PES are often low-end jobs and therefore less attractive for higher qualified workers. This then creates a stigma among employers that applicants searching for employment via PES are less qualified or suited for a job.

Employment in the informal sector or shadow economy can also be a key factor in why unemployed individuals may opt not to register with public employment services. The shadow or informal economy involves activities that are productive and legal but are deliberately hidden from authorities to avoid taxation or meet regulatory standards. In the case of Malta, in 2019 the underground economy was estimated to account for 21% of the GDP, making the sector a significant contributor to providing work opportunities. Individuals who have long been employed in this sector may opt to not register with Jobsplus during their unemployment spells due to the fear of being taxed heavily or being subject to regulations that can affect their income.

Another outlook worth analysing is the potential economic implications of the upcoming COLA on the labour market. Economic theory, as highlighted by the Philips Curve, states that there is an inverse relationship between unemployment and inflation. Inflation in the past months has led to speculation that the COLA will be between €8 and €10 in the upcoming budget. Unless appropriate measures are undertaken, this higher-than-normal COLA may potentially lead to a wage-price spiral. This term refers to a vicious cycle where workers demand upward wage reviews due to increasing inflation (in this case, through the COLA), such that employers continue to offset higher labour costs by raising their prices. Such a series of events would lead to a negative feedback loop, adding to the existing uncertainty and tension in the economy.

The Malta Employers Association (MEA) carried out a survey among businesses, finding that 55% of respondents feel that the COLA rise will affect their competitiveness. In fact, in a recent joint statement, Malta’s trade union groups have proposed a new alternative cost of living mechanism to the government, warning that a COLA increase of €10 per week could drive employers out of business. In addition, the president of the Malta Chamber of Commerce (MCC), Marisa Xuereb, has argued that a relatively high COLA increase would lead to more inflation. She stated that the allowance would be more effective if specifically targeted to low-income groups and to those employees who have not received wage raises during this inflationary environment.

Therefore, a COLA between €8 and €10 may have undesirable effects on the labour market. One possibility is the potential for higher unemployment rates as employers try to cut down their costs in order to be able to pay higher wages. The other potential implication is even higher inflation and thus an even higher COLA for 2024. More specifically, businesses may opt to increase their prices to offset the financial burden brought about by the COLA, implying an even higher cost of living, hence rendering the COLA ineffective. As a result, a wage-price spiral would be in effect, especially if this trend persists in the coming years.

Appropriate policies are hence crucial to mitigate the possibility of a such wage-price spiral. In mitigating inflation and inflationary expectations, policymakers can resort to either fiscal or monetary policies. Monetary policy is undertaken by the Central Bank and it entails altering the money supply and/or interest rate, while fiscal policy is undertaken by the government through changes in tax rates and/or government spending. Policies implemented during inflationary periods are optimised when they are targeted at tackling the underlying cause of the rising price levels. The root of the 2022 inflationary environment can be attributed to a combination of the significant increase in money supply growth during the pandemic, the unforeseen rise in raw material costs for producers, and the economic uncertainty caused by geo-political turbulence.

In terms of monetary policy, central bankers worldwide have already been increasing the cost of borrowing in financial markets in order to reduce the availability of credit, aiming to push inflation back to its target. Meanwhile, due to the large increase in public debt during the pandemic period, governments are limited in their spending capacities, such that they could only influence the economy by adjusting taxation rates.

All matters raised in this report are only those which came to our attention and are not necessarily a comprehensive statement of all weaknesses and strengths, and potential risks and opportunities that exist. Though no complete guarantee can be given with regard to the advice and information contained therein, care has been taken to ensure that all the information provided in this report is accurate as possible, enabling us to provide a reasonable representation of the sector. The report is prepared solely for the exclusive use of its recipient/s as indicated in the covering letter accompanying the report, and otherwise, the report should not be quoted or referred to in whole or in part without our prior consent.

No responsibility to any third party is accepted as the report has not been prepared, and is not intended for any other purpose.  PKF Malta is a member firm of PKF International Limited network of legally independent firms and does not accept any responsibility or liability for the actions or inactions on the part of any other individual member firm or firms.